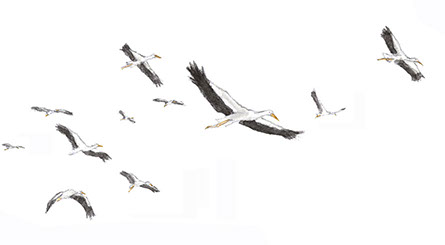 In May, the picture book “Marius – Ein Storch fliegt nach Afrika“ (A Stork Flies to Africa) will be published by Baeschlin publishing house.

Marius has no choice. Together with his sister and the other young storks, he sets off. On their flight across half the world, the storks see a lot of destruction, but they also encounter a lot of beauty. And they see people who head the other direction: Like Marius and his fellow storks, they too are in search of a better life.

After a long and dangerous journey, they finally arrive in Africa, and now Marius knows that one can be at home in two places.

Dana Grigorcea came up with the sensitive story about storks and people; Edi Ettlin translated it into pictures.

Link to the publisher's site